Butterflies are indicators of a healthy environment and are generally described as the essence of freedom, peace and nature.

Butterflies are indicators of a healthy environment and are generally described as the essence of freedom, peace and nature.

Northern Cyprus is famed for its rural diversity, the beauty of which acts as one of the main draws to this jewel in the Mediterranean. From the stunning mountain ranges of Kyrenia to the powder soft beaches in the Karpaz Peninsula, the Cypriot landscape is as picturesque as it is varied. Little wonder then that North of the country attracts thousands of holiday makers year upon year. The very same reason in-fact that this sun kissed isle is loved by an altogether different breed of visitor...the humble butterfly.

Thanks to its geographical location, Northern Cyprus acts as a resting point for over 50 different species as they make their yearly pilgrimage, with many other species claimed but not yet verified. Hundreds upon millions of butterflies will migrate each year, flooding the skies with swathes of colour whilst navigating their way across the miles to ensure their continuing survival.  Butterflies are indicators of a healthy environment and are generally described as the essence of freedom, peace and nature. 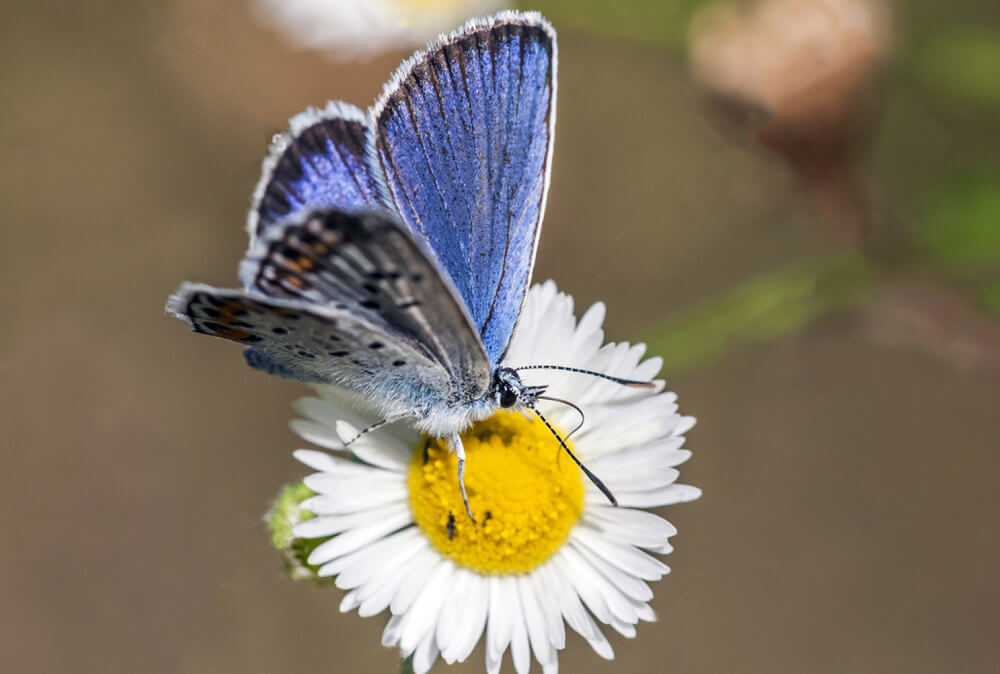 The fully grown butterflies appear in February in coastal areas such as Kyrenia and Famagusta. They are on the wing until May in lowland areas, however at the beginning of July they appear in the mountain areas. Butterfly watching is a growing hobby in North Cyprus for nature lovers, where observers find, identify and record their behaviour. It is particularly amazing on the Five Finger Mountains and Alevkaya area, where you are likely to see Cyprus Grayling and Cyprus Meadow Brown. You can also spot gorgeous butterflies in bushes, nearby flowers or shady locations. If you take a stroll through the Alevkaya forest between May and September you may have the unique chance to see the wonderful Hermit and Eastern Rock Grayling. 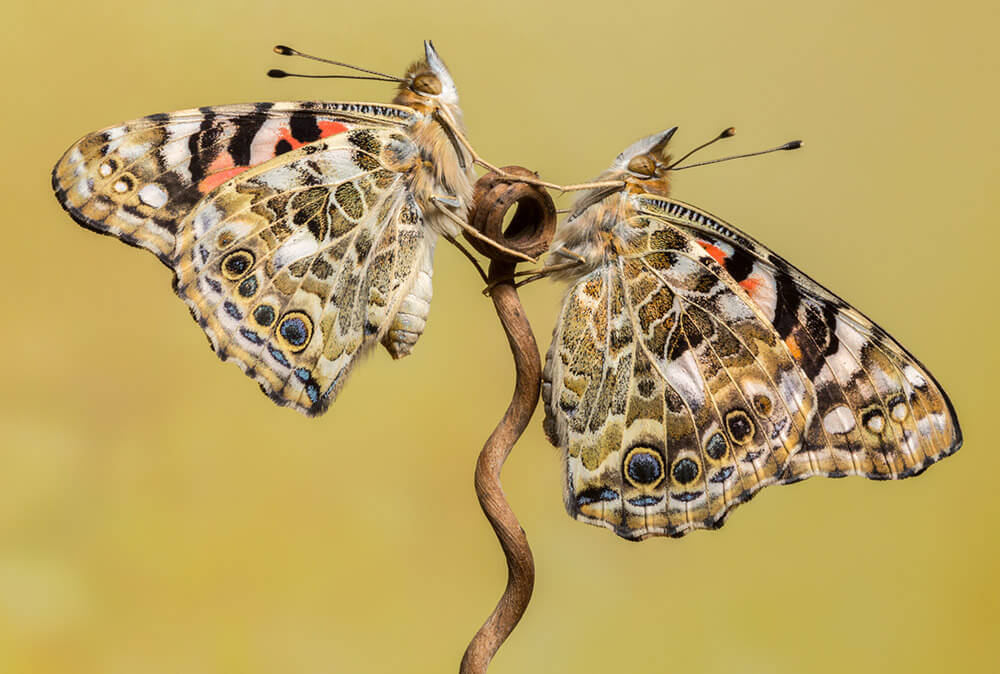 One of the most easily recognisable visitors, is the Vanessa Cardui or Painted Lady. This particular species, distinguishable by its warm orange wings, edged in black and spotted with white polka dots, has an impressive wingspan of up to 9cm. During the month of March, this delicate creature travels up to an astonishing 15,000 kilometres from is wintering locations in Africa, through the Mediterranean and onto Europe before making the return trip in Autumn.

Several varieties of butterfly are endemic to Northern Cyprus, which means that these beautiful insects can be appreciated throughout all four seasons. The Paphos Blue or Glaucopsyche Paphos is one of the island’s permanent residents and unmistakable due to its iridescent blue wings. February sees the adult butterflies start to emerge in coastal regions and are visible on the wing until June.

The Levantine Leopard or Apharitis Acamas appears during the month of June and is a rare and spectacular sight. With wings bearing a distinctive leopard print on the underside, edged in a fine line of silver scales, these delicate wings hold a secret only revealed in the sunlight. Each hind wing possesses two tails, the large of which is painted with an area of blue and only visible when the light hits it.

Most commonly seen between April and October at all altitudes, is the Cyprus Meadow Brown or Maniola Cypricola. A lover of fragrant herbs such as thyme, the females are blessed with wings painted on the upper side in shades of amber and yellow, with a distinctive jet black eye spot. Interestingly, the males of the species are less boldly marked. 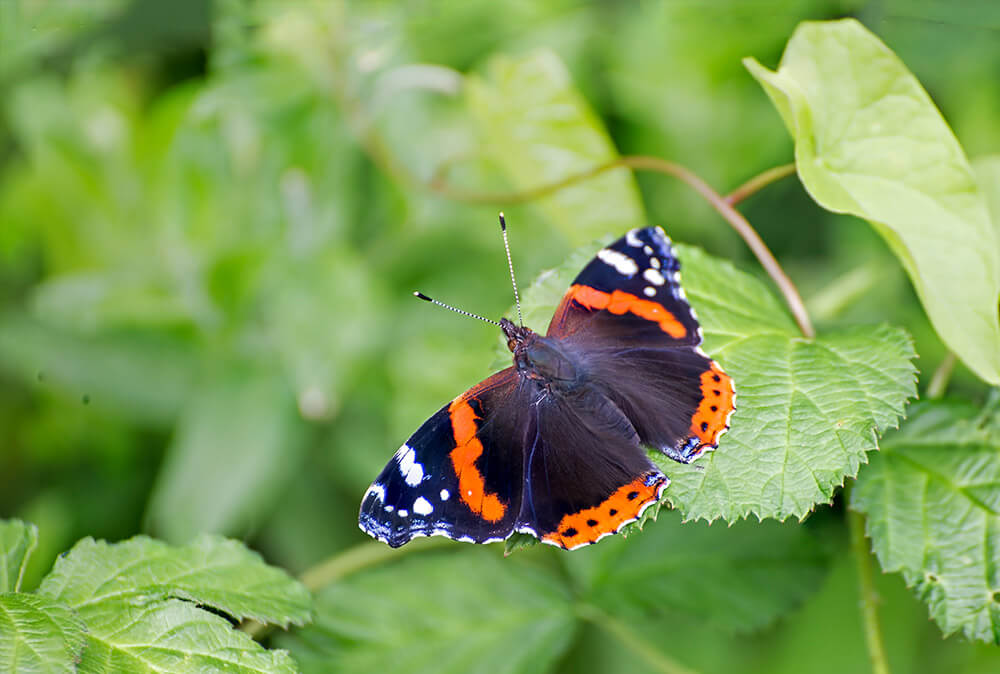 Another butterfly that enjoys the warmth of the Northern Cyprus climate is the Vanessa Atalanta, or Red Admiral. Easily recognised by its black velvet wings, intersected by striking red bands and specks of bright white, this specific butterfly is fiercely territorial. So much so, that females will only mate with males that hold territory. Unusual in the fact that this butterfly is regarded as ‘people-friendly’, the Red Admiral is only too happy to use the human form as a comfortable perch on which to rest.

With such a wealth of beauty to be found in the diminutive form of the butterfly, this is just one more reason to make Northern Cyprus your next choice for a summer holiday destination.