The Legend of the Evil Eye

The evil eye, also known as the "nazar" has a huge influence on the Cypriot people and their way of life.

The Legend of the Evil Eye

The evil eye, also known as the "nazar" has a huge influence on the Cypriot people and their way of life.

The evil eye, also known as the "nazar" is a big part of Cypriot culture. Throughout the ages, the evil eye has always been considered a powerful protective symbol to conquer and defy evil forces and negative energy. Nearly all Cypriots believe in the evil eye, and they believe that the nazar amulets and charms protect them against any negative energy, so you are bound to find one in almost every home in North Cyprus, as well as shops, cars and even on small children!

In our article below, we explore about the legend of the evil eye and discover five ways in which the Cypriots try to protect themselves against it and the negative energy it creates.

What is the Evil Eye?

The evil eye curse and the nazar legend are actually one and the same thing, whereas the evil eye symbol is what is used to ward off negative energy and can be seen on charms and amulets.

The evil eye is a curse believed to be cast by a person giving another person a malevolent glare, being two-faced or having impure or nasty thoughts whilst talking to them. It could be that someone says to you: "I like your dress, it looks lovely on you", when in fact do not mean what they say and are envious or jealous. Something bad would then happen to your dress, such as spilling something on it or ripping it if you are not protected with an evil eye amulet or charm. Another example could be when a couple get married and someone says "I am so happy for you", when in fact they disagree with the marriage or are secretly unhappy or resentful. According to the legend, the couple's marriage would not last unless they are protected by an evil eye charm. 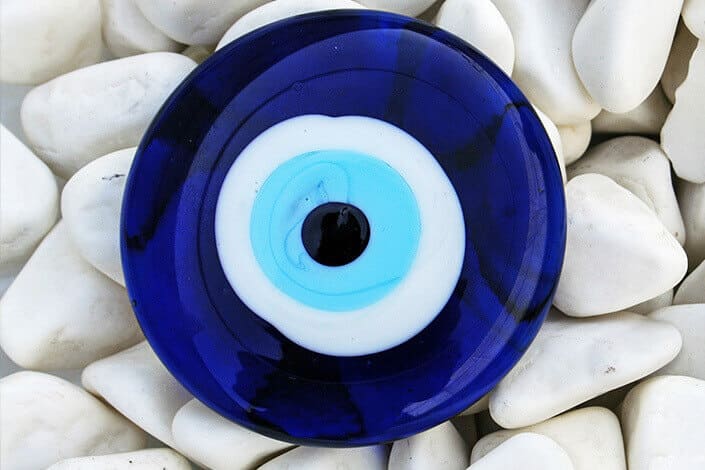 An evil eye charm, also known as a nazar amulet

Essentially, any time a Cypriot believes someone has given them a false-compliment, is two-faced, has said something which could be considered malicious or envious, or has possibly had negative or impure thoughts about a person; they need to protect themselves against any ramifications using one of the methods below.

Cypriots believe that burning olive leaves is a symbolic act for warding off the evil eye. As per tradition, the oldest person in the household will burn dried olive leaves (known as tutsu) in a dish or bowl. Once the leaves are smouldering, they are passed around the head of person who wishes to be protected three times whilst saying "may you be protected from bad eyes". Alternatively, olive leaves may be burned inside a ceramic pot made specifically for this purpose and left outside the front door of the house to prevent the evil eye from entering. 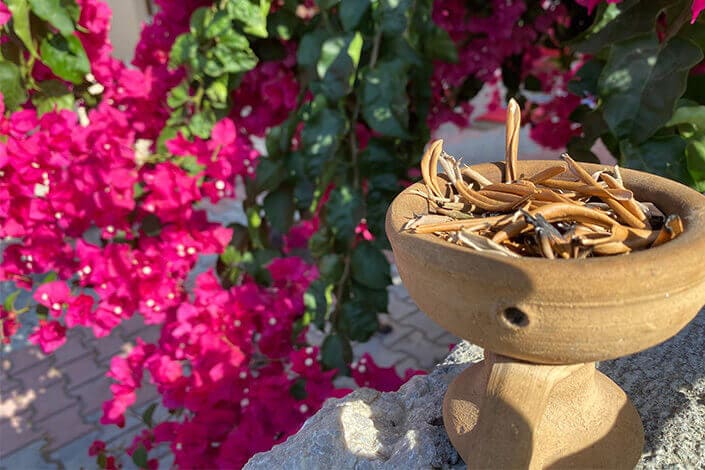 A popular charm you will see almost everywhere in North Cyprus, the nazar or evil eye amulet is believed to protect the wearer or property from evil energies. The charm is believed to absorb the negative energy of the evil eye. It is believed that the charm will break when it is full of negative energy, protecting you from it, and it then needs to be replaced. 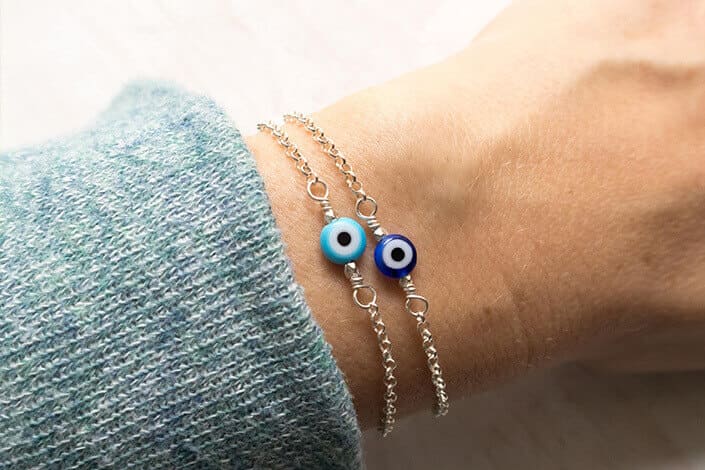 A person wearing a nazar charm

Typically Cypriots will buy evil eye jewellery as gifts when a baby is born or a couple are getting married to protect them from harm. It is a traditional gift to buy for loved ones, and a popular souvenir. You can purchase necklaces, earrings, keyrings, bracelets and bag charms from almost all gift shops in North Cyprus featuring the blue and white evil eye.

Most Cypriots will hang an evil eye charm outside their front door of their home or business to prevent the evil eye from entering the property. It is also used as a hanging charm in cars, and other places where people gather.

Generally, a nazar charm is handmade from glass, and features circles or teardrop shapes in various shades of blue, white, black and sometimes with gold edging.

Over the passage of time, various other items have been decorated with the evil eye symbol, from door stops, coffee cups and jewellery to cookware, clothing and wall hangings. 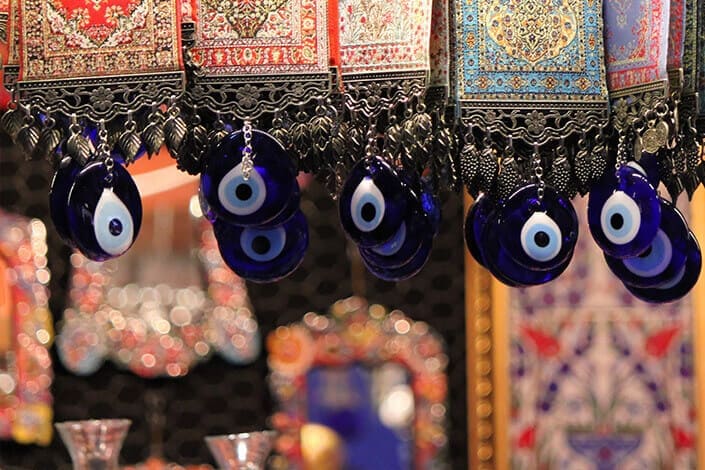 When you see a Cypriot scratching their bottom whilst talking to someone, it's not that they are being rude, in fact they will scratch their rear-end if they feel any negative energy or if they feel the person they are talking to is giving them the "evil eye". 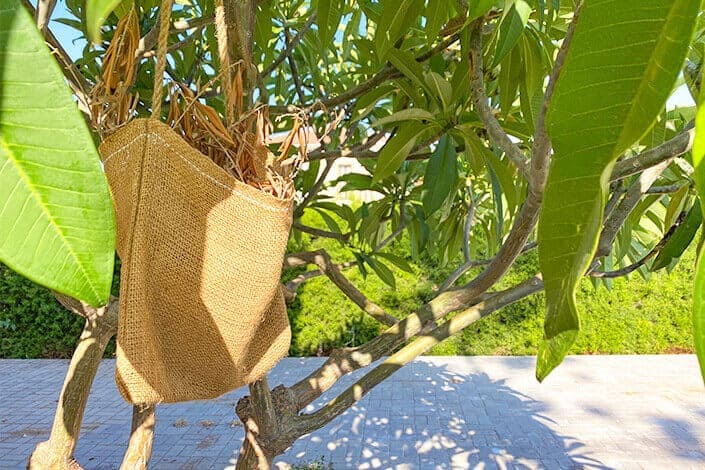 Wiping the House with Vinegar

If a person within a household starts speaking about negative energy in the house, the older generation of the house will tell the person to wipe the entire house down with a water and vinegar solution. They believe that by doing this, it will cleanse the house of negative energy and protect the house and contents from absorbing any of it.

So next time you are in North Cyprus on holiday be sure to pick up an evil eye charm to give to your loved ones as a gift!

We bring you the True Cypriot Culture Uncovered below: